Malcolm 'Mac' Robertson (Class of 1967) enjoyed a long and distinguished career in aviation, spent largely in Australia. He now lives in Thailand where he is helping to develop a home stay resort. Mac, part of Class of 1967, has fond memories of his time at school and like so many has a few words for French teacher Mr Burrows;

"I thoroughly enjoyed school and the environment that existed at Sullivan.   The teachers were dedicated and the extra curricula activities engaging. As I recall the most entertaining teachers during my time were Mr Gould (Chemistry) who had experience from industry and was a dead shot with a board duster in the Lab and Mr Burrows (French) who had an amazing collection of gawdy ties (one for every day of the year he boasted!)".

After school Mac studied Aeronautical Engineering at Queens and then did an apprenticeship with Shorts (1967-71). He then joined the RAF as an Engineering Officer and transferred to the Australian Air Force in 1988. 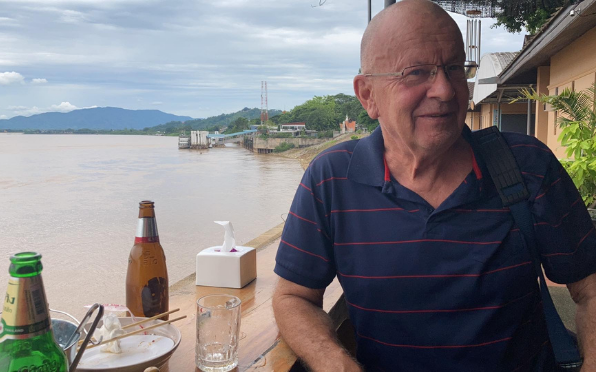 In 1994 he left the forces and had a range of government and commercial aviation roles including Chief Engineer for the Royal Australia Navy Aviation Support Group . In 2004 he joined Tenix Defence Australia, later taken over by BAE Systems Australia, as Chief Engineer for all Aviation programmes and then became the Head of Technical Airworthiness and Product Safety until 2013 when he retired.

While Mac hasn't been back to Northern Ireland since 1995 when he last visited with his brother Andy (Class of 1961) to scatter his father's ashes, he is still in regular contact with Leon Agnew and Martin McCleave from his class.

With retirement, Mac moved to Thailand but continues to offer consultancy services to the aerospace industry in the region as well as to the Royal Aeronautical Society in London and to the University of New South Wales in Australia.

He has also invested in a newly built home stay resort. Due to open mid 2022, the resort (pictured below) will be focused on wellness, meditation, peace and quiet, Thai cookery lessons and local touring. Sounds heavenly!

"I intend to stay in Thailand for the foreseeable future with occasional visits to Australia where I still have many friends and colleagues.  I keep very fit and so far have avoided the COVID 19 virus due mainly to the isolation of our resort in the Hills North of Chiang Rai in far North Thailand close to the Laos/Myanmar borders.   I like the warm weather and the Asian diet!"

Malcolm 'Mac' Robertson (Class of 1967) enjoyed a long and distinguished career in aviation, spent largely in Australia. He now lives in Thailand where he is helping to develop a h… More... Our latest chat with an SUS 'exile' is Ian Fitzgerald, Class of 1986. Ian lives and works in Groningen in the Netherland… More...