To kick off our series focusing on Sullivan Exiles – former pupils living and working abroad – we catch up with Alex Post (Adams) who has spent the past 18 years living in Anchorage, Alaska. I caught up with Alex (Class of 1997) last month, one Friday evening (my time) which was 10am on Friday morning for her. Even so far away, Alaska is not unaffected by Covid-19. Alex’s son Andrew (6) had just returned to school two weeks previously but her daughter Grace (10) was still homeschooling - her eventual return to the classroom marking the end of 320 days at home.

“We were on holiday in California for Spring Break last year when things really started to get scary around Coronavirus. We arrived home and went straight into Lockdown.

Alaska shut down quickly. The big issue for Alaskans is that our main hospitals are in Anchorage and outside of that there are only small centres. If  hospitals in Anchorage get  overwhelmed then patients would have to be flown to another state for care, and that flight, even to Seattle which would be our closest US city is 3-4 hours, so you would end up a long way from family and friends.

Thankfully though, we’ve been well but we literally do nothing. Restaurants and bars are open but we are being careful. We stay home, go to the grocery store every two weeks and otherwise just run the odd errand to the store.”

So how did Alex, who grew up in Holywood, attending Holywood Primary School before transferring to Sullivan for First Form (Year 8) end up so far away from home in Alaska?

After school she went straight to Queen’s University in Belfast where she studied Geography and then did a postgraduate degree in Rural Development. Following the submission of her final postgrad assignments in February 2002 she set off on her travels, heading straight for Alaska.

“I was always really interested in Alaska. It seemed like a really cool place to go and I was keen to experience a proper winter so that’s where I headed.”

Once she arrived she met Lee Post, an Alaskan born and raised, and they were engaged after just 6 weeks.

After 3 months, Alex’s tourist status in Alaska was up and she returned to Northern Ireland with an engagement ring.

She graduated from Queens with her Masters in Rural Development and then continued her travels to Hawaii, the West Coast of Canada, Australia and New Zealand with school friend Claire Costello (Class of 1997).  Once back home, she even found time to squeeze in a trip around Ireland with a friend from her post grad course.

“My dad was from Donegal so all of our holidays in Ireland had been spent in Portnoo which was wonderful but meant that I never saw anywhere else - the road trip was a great way to see places like the Ring of Kerry and Cork.”

Meanwhile Lee was patiently waiting for Alex to be able to return to Alaska. I ask Alex if she had to just through hoops just like Ryan Reynolds and Sandra Bullock in ‘The Proposal’ when she was trying to get a Green Card and it seems the process wasn’t far off that portrayed in the film.

“I was screened in London and had to provide lots of information to prove that we were a legitimate couple and that I was marrying for love and not a Green Card.

We had a dossier that included our engagement announcement that we had clipped out from the local paper, examples of emails Lee and I had exchanged, photos of us together and photos of him with my mum.

Once my status was granted, I was allowed to return to Alaska and we had 90 days to complete the marriage ceremony which had to take place there.”

Alex and Lee were married in April 2003 and she applied for a work permit straight away which she got in June.

“My step-dad has a PhD in Geography and was an environmental consultant and so given my degrees and my interests I thought this would be a good career path.

As luck would have it Lee, who worked across the road from the University, spotted a job ad on a campus noticeboard for an environmental consultancy who were looking for an entry-level graduate.

I interviewed for the job, and am convinced that I was hired for not just my degree, but also for my unusual accent!

"I work in the world of compliance as a Documentation Manager so I manage records, procedures and policy. The end of this pipeline is where Exxon Valdez oil spill happened in 1989 and my job is to help make sure everything is done right and that includes procedures to maintain the pipeline.”

Away from work Alex has thrown herself into life in Alaska.

“I was always outdoorsy and was a member of the mountaineering club at Queens spending a lot of time in the Mournes. If you don’t participate in the outdoors in Alaska you are missing out, and otherwise there isn’t a lot else to do.

Nordic skiing is big. We have lots of well-maintained trails and Grace and Andrew do a programme called Junior Nordic three times a week. I can ski myself while they are in their class.”

Being in the Northern Hemisphere, the seasons in Alaska are the same as ours but the short days in winter and very long days in summer have taken some getting used to.

“On our shortest winter days it won’t be light until 10am but it will be dark again by 3pm – we only have a short window in daylight.
However in the summer the days are very long, the northern most parts of the State have 24 hours of daylight and even here in Anchorage it never really gets that dark – you can be pottering in the garden and suddenly realise its 10.30pm.” 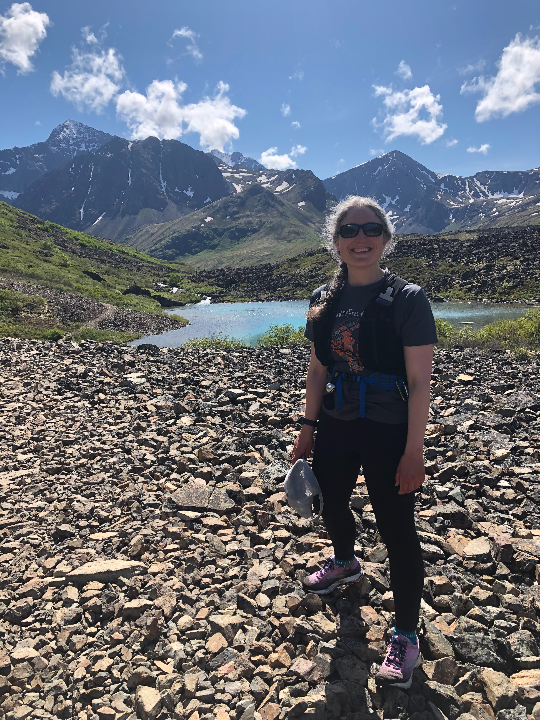 Alex has lived in Alaska for 18 years now, almost as long as she lived in Northern Ireland, but despite this, Holywood is still home.

Her last visit to Northern Ireland was timed to coincide with Class of 1997’s 20 year reunion which was held in Holywood Golf Club in June 2017. Covid has scuppered her plans to return with the family this summer and instead they are going camping to Denali National Park, home of Mount McKinley, the highest mountain in North America.

“I’m still in touch with friends from school, Facebook is brilliant for that but I communicate most often with Hollie Bailie and Megan Watson – I’ve known Megan since pre-school. I’m hopeful we might get back to Northern Ireland in 2022 (by which time it will be a 25 year reunion for class of 1997!).

I look fondly back on school days and have never regretted picking Sullivan as my ‘big school’. I was in 1B with Dr Brown (History) as my form teacher. I loved Drama Club, Home Economics and Cooking Club and have vivid memories of chaos after David Harvey stuffed a tissue down the back of the heater in Mr Kitson’s French class and it went on fire.

I remember very clearly how the school was laid out, and it’s been lovely to see the online open day videos recently and to see what has changed, and what hasn’t!

The most terrifying thing however is that all those teachers, who we though were incredibly old were actually the age I am now, or younger!”

If you're a former Sullivan pupil or teacher now living abroad we'd love to hear from you. You can either email hello@sullivanconnect.co.uk or complete this form and we'll be in touch. Our second Sullivan exile is Richard (Dick) Pentland from Class of 1962. Dick has lived in Halifax, Nova Scotia, Canada for the past 45 years and spent a career travelling all over… More... Are you a former Sullivan pupil now living and working abroad? More...