There's a new High Sheriff of Belfast and he's a former pupil of SUS.

Belfast City Councillor and former pupil of SUS (class of 1989) Michael Long was sworn into office on the 15th January 2021 as the 121st High Sheriff of the city.

We caught up with Michael to find out more about the role as well as some of his memories of his school days at SUS.

“Technically I am the Queen’s judicial representative for Belfast and having read through the warrant I had to sign last week, I discovered that I’m meant to tell Her Majesty if someone hasn’t paid their bills.

But, in reality I will assist the Lord Mayor and Deputy Lord Mayor with their workload and be involved in any Royal visits in a welcoming capacity.”

Historically, the position of High Sheriff is one of the oldest secular offices in Britain, dating back to the Local Government (Ireland) Act of 1898. Today appointments to the position are made by the Secretary of State for Northern Ireland, usually upon the recommendation of the council.

Michael has been Group Leader on Belfast City Council since 2015 and this position gives him an opportunity to further his interest in building a shared and diverse Belfast.

“This position gives me a chance to take a step back from the day to day work of Council and to see a really positive side of Belfast, getting out and about visiting community groups, Covid-permitting, as we come out of lockdown.”

Born in Canada, Michael’s family moved back to East Belfast in the 1970s. He attended Belmont Primary before transferring to Strandtown Primary and joining Sullivan in First Form in 1982.

He describes himself as quiet and studious and modestly refers to singer and musician Duke Special (Peter Wilson) and journalist, presenter and editor Alison Fleming as better known people in the same year group as him.

“I was definitely on the studious side at school. I was very enthusiastic for sport but not particularly talented, and I hated rugby. I much preferred football and played hockey for the 1st XI for a period of time.

I liked singing and was involved in the Sullivan Singers from 1st-3rd Form which I really enjoyed, led by Mr McCombe the music teacher”

Michael left Sullivan in 1989 to study Dentistry at Queen’s University in Belfast and worked initially in the Royal Victoria Hospital and then in practices in Lurgan and North Belfast before settling at the Harbour Dental Practice at Donaghadee where he still works today.

Having met his future wife Naomi while still at school and marrying in 1995, it was in the early 2000s that they both decided to get involved in local politics, prompted by a strong sense of civic responsibility.

“We were trying to decide if we should stay in Northern Ireland or leave and we felt that if we were going to stay we should try to make a contribution to a more positive future.”

Naomi is currently the Leader of the Alliance Party in Northern Ireland and Minister for Justice within the Northern Ireland Executive. She has previously served as Lord Mayor of Belfast, an MP and an MEP.

“Naomi and I were elected at the same time but she’s had a rather different trajectory to me” laughs Michael. “I’ve stayed where I was and she went off to become an MP.” 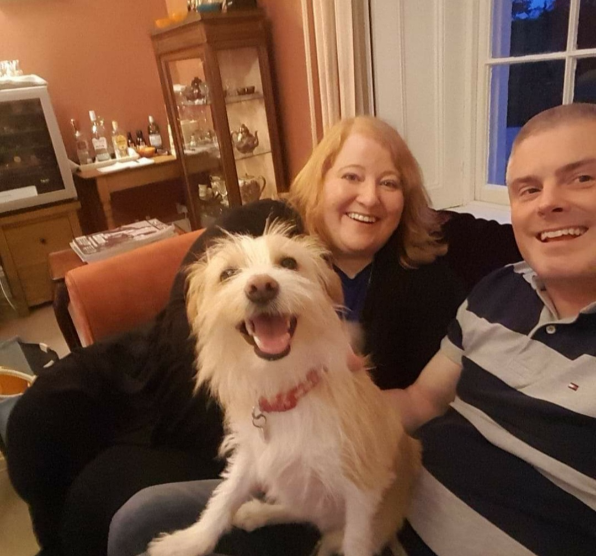 Michael and Naomi at home with their dog Daisy

Still in touch with a few of his year group (there were four dentists emerging from Class of ’89), Michael says he comes across Sullivan connections everywhere. Those include Chris Lyttle (class of 1999) who is also involved in the Alliance Party and is an MLA and Chair of the Education Committee at Stormont and Mark Simpson (class of 1985) who as a BBC Reporter regularly covers local political stories.

“Sullivan connections are everywhere. When you’re out knocking doors it’s amazing how many people you meet from Sullivan.

Does he look fondly back on his school days at Sullivan?

“Definitely. There’s a tolerant attitude in Sullivan, an inclusive approach to things which ties quite well with my politics.”

He also cites the school motto as piquing an interest in the Irish language which he has furthered and he is able to confidently pronounce Lamh Foisdineach An Uachtar, the gentle hand foremost.

We wish Michael the very best and look forward to following his year in office as High Sheriff of Belfast. She's the former Sullivan pupil juggling a medical degree and aiming to make the Ireland Hockey Squad for this summer's … More... Did you meet your love match at Sullivan Upper?

With Valentine's Day on the horizon, we want to hear from you if you met your love match at Sullivan. More...